QuickCheck: Was the Royal Air Force's last Spitfire mission over Johor in the 1950s?

A Spitfire PR MK XIX at the "100th Anniversary of Dutch Military Aviation" airshow. She has just flown in directly from the UK. Although retaining her genuine serial, she is otherwise painted to represent "PS888" which carried out the very last RAF Spitfire sortie. - Courtesy of Alan Wilson (CC BY-SA 2.0)

Is this story about the sunset of one of World War II's most famous fighter planes true, or is it a tall tale flying high?

A photo-reconnaissance Spitfire PR Mk XIX with the registration number of PS888 flew the last operational mission of the aircraft for the RAF on April 1, 1954 to find the locations of a suspected guerrilla camp of the Malayan National Liberation Army, the militant arm of the Malayan Communist Party.

To mark the occasion, the Spitfire - which was being operated by the RAF's No. 81 Squadron - had the words "The Last" painted on its engine cover a few hours after it returned to Seletar.

ALSO READ: QuickCheck: Did a UK RAF squadron have a Malay motto?

Additionally, according to a write-up on the RAF Seletar and Tengah Association official website by "Seletar Crowning Glory" author David Taylor, there had been a mistake with the accreditation of the Spitfire's last flight with the first air force it served with.

It was explained that two British companies had actually presented No. 60 Squadron at Tengah in Singapore with a silver model of the Spitfire as they had believed it flew the last operational sortie of the type in 1951.

This was, however, disputed by the commander of No. 81 Squadron, Sqn Ldr W P Swaby who wrote a letter to the RAF's Far East Air Force headquarters on this matter.

The result of the letter was that Rolls Royce and Vickers Armstrong presented 81 Squadron with their own silver Spitfire on Nov 21, 1954; the model was handed over by former Supermarine chief test pilot Jeffrey Quill, who had flown every mark of Spitfire - including the first prototype in 1936.

As for the fate of PS888 itself, the Association's page on it states that it was handed over to the Royal Thai Air Force on July 3, 1954 after which no further records can be found on its ultimate fate.

QuickCheck: Did a UK RAF squadron have a Malay motto?

QuickCheck: Did a bell at KL's Victoria Institution come from a British battleship? 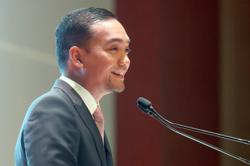