A police line is seen outside the house in Melaka where the Singaporean man allegedly murdered his wife and stepson. PHOTO: LIANHE WANBAO

MELAKA (ANN): A Singaporean man suspected of killing his wife and stepson and dismembering their bodies in Melaka led the police on Saturday (Oct 12) to discover severed heads on the roof of his house.

The highly decomposed and dismembered remains of the victims - a 27-year-old woman and her 11-year-old son - were first stumbled upon by a grass-cutter in bushes next to the Krubong industrial area on Thursday (Oct 10), The Star reported.

Police believe they had been dead for four or five days before the eight body parts - sans heads and hands - were found.

The suspect had allegedly chopped up the two bodies with a machete and later discarded the parts at two locations.

Melaka police chief Mat Kassim Karim said the suspect was arrested on Friday (Oct 11) with the cooperation of Singapore authorities.

In a statement, the Singapore Police Force (SPF) said Singapore police received a request for assistance from the Royal Malaysian Police (PDRM) over a murder case in Tanjung Minyak, Malaysia.

"The SPF had arrested a 31-year-old man and handed him over to PDRM on Oct 11, 2019, to aid in investigations. It is inappropriate to comment further as investigations by PDRM are ongoing."

Police took the suspect to his rented two-storey house in Taman Merdeka Jaya on Saturday - where blood stains had been discovered in a bedroom earlier - and found heads on the roof, Sin Chew Daily reported.

But it remained unclear if they belonged to the mother and son.

It is understood that the Singaporean had a heated argument with his wife over family issues when he turned violent and stabbed her with a kitchen knife before decapitating her with a machete, Malaysian daily China Press reported.

The suspect also allegedly killed the woman's 11-year-old son, one of four children from her previous marriage, who witnessed the slaughter.

The suspect reportedly chopped off the victims' heads and hands, and dumped the hands in a trash bin near the house. The hands were still missing on Saturday.

The rest of the bodies were dismembered, packed into bags and loaded into the boot of a car for disposal.

The woman's youngest child was said to be riding in the car when the suspect was discarding the remains.

The suspect will be held in remand until Oct 18. – The Straits Times/Asia News Network

S’porean hubby arrested in murder of Melaka woman and son 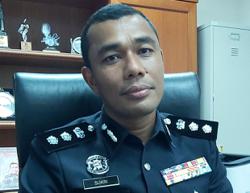