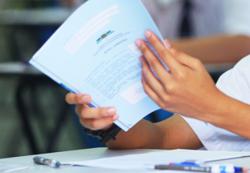 JOHOR BARU: There are inconsistencies between the statement issued by the Education Ministry with what was communicated earlier regarding a viral SPM workshop, claim parents of students at an elite all-girls school here.

According to a statement from concerned parents and members of the school's Parent-Teacher Association (PTA), the workshop was never discussed in earlier PTA meetings.

ALSO READ: SPM workshop was meant for all students regardless of race, says Education Ministry

"We find the Education Ministry's statement after the workshop went viral as inconsistent with what had been told to us by the school's principal when queried about it.

"Both Phase 1 and 2 of these workshops were never discussed at PTA meetings nor approval sought for the use of funds for them.

"We consider this a serious breach of trust. It has become apparent that not all members of the PTA were privy to this information and measures," the statement read.

They also hoped that such incidents would not happen again in the future.

"We seek an assurance from the PTA as well as the school administration that all future planning and communication will be collaborative and transparent, to avoid occasions of discriminatory and divisive practices," they said.

They also thanked the Johor Baru Education office and the state Education Department for promptly facilitating a meeting on Wednesday (Jan 25) morning to address the issue.

ALSO READ: No one should be excluded

"Finally, our respect and gratitude to our Ruler His Majesty Sultan Ibrahim Ibni Almarhum Sultan Iskandar for his support of inclusivity and justice. Daulat, Tuanku," they added.

Earlier, tweets of the school allegedly organising an SPM workshop only for Muslim students went viral and gathered strong reactions from the public.

"The school held a two-day, one-night SPM workshop for only Muslim students at a hotel, saying that it will only involve religious-related subjects.

"However, it turned out to be a comprehensive workshop covering subjects such as Chemistry, Additional Mathematics and other subjects," said Twitter user @sangria200 in a thread on Twitter.

In response, the Education Ministry said that the workshop was meant to be for all students regardless of race or religion and was planned to be held over two sessions.

"Initial investigations found that the workshop was part of the many initiatives of the relevant parties to ensure that students, regardless of race, are able to make the necessary preparations for SPM.

"The first series of the workshop was held earlier on Jan 19 and 20 in a hotel and involved some 30 SPM candidates who failed the Bahasa Melayu and History subjects as well as those who received 'gagal-lulus' (fail-passed) in some other subjects.

"The workshop was held separately based on sessions to avoid disturbing candidates who are preparing for Chinese New Year," it said.

The Ministry added that the follow-up session for other students was slated to be held between Jan 26 and 27 at the same hotel.

The Johor Sultan had also issued a statement on the matter, stressing that no one should be left out of any public programme due to their race or religion,

“Nobody must be left out of any public programme because of their race or religion. If it is true that there was racial segregation, then action must be taken against the organisers.

"The same can also be said if it is found that these allegations are proven false and spread by irresponsible parties,” he added.