JOHOR BARU: The Johor Fire and Rescue Department anticipates an increase in open burning cases starting next month, once the monsoon season is over.

Mohd Rizal Buang, the department’s acting director, said that 161 cases of open burning had been reported as of yesterday. The department, he said, would be calling for the state disaster management committee to meet in February to discuss preparations for the dry season.“For the past two weeks, we have received an average of seven open burning cases, with the highest record of 17 cases in one day.

“But since it has been raining for the past few days, the number of reports has gone down a bit. However, we anticipate that cases will rise again due to the transitional phase to the dry season or El Nino,” he said.

Mohd Rizal added that the department will also be monitoring peatland areas in the state to ensure that there are no occurrences of open burning in those areas.

“Some of the hotspots in Johor are at Lepau in Pengerang, Gunung Arong in Mersing, and from Jalan Bakri-Parit Sulong, namely Batu 8 until Batu 17, in Pagoh,” he added.

He said that the department has ensured that its open-burning and forest fire equipment is ready for deployment.

“The equipment, such as the portable pump and jet pump, is mobile and easy to carry into remote and deep areas.

“Fire on peatland areas will also require a tactical approach, such as placing a tube well and building a check dam so that we can submerge the peat soil in water.

“Peat soil is like a sponge; during the dry season, it will be dry and easily burn, but during the wet season, it will store water,” he said, adding that the department will usually create a trench as a firebreak to prevent fire from expanding.

He was commenting in response to Natural Resources, Environment and Climate Change Minister Nik Nazmi Nik Ahmad’s statement to set up the National Open Burning Action Plan this year.

“The Malaysian Meteorological Department will usually send an alert to the related department a month or two before our country faces dry weather.

“For us in Johor, we plan to start our open burning prevention campaign through the Communication, Education, and Public Awareness (CEPA) programme that we plan to introduce between May and June this year.

“At the same time we will mobilise the Environment Action Committee (JKTAS), chaired by the state environment exco, to coordinate all related government agencies to work together and prepare for any open burning cases,” he said.

He added that the agencies include the Fire and Rescue Department, the Forestry Department, the Land and Mines Department, and all of the state’s local councils.“For the state DOE, we will be in charge of monitoring the peatland areas in the state to ensure that no one is involved in causing open burning,” he said, adding that those caught will face legal action under the Environmental Quality Act of 1974.

Earlier, MetMalaysia director-general Muhammad Helmi Abdullah was reported as saying that it is still too early to predict the probability of El Nino, its strength, and its impact on the country.

‘Snuff out the open burning now’ (Poll Inside) 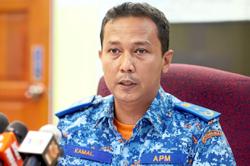