JOHOR BARU: Johor police are expecting heavy traffic on major roads including the Causeway and Second Link during the Chinese New Year festive period and will boost manpower at those locations accordingly.

"The number of vehicles, cars in particular, is expected to increase by two to three times, especially during peak hours.

"Maybe the number will go up in the next one or two days before Chinese New Year and two to three days after the (holidays)," he said when met after a safe home campaign walkabout at a shopping mall here on Tuesday (Jan 17).

He added that police presence would be increased at both BSI and dKSAB complexes, from 120 personnel and officers to 250, to control traffic flow.

Other relevant agencies would also be enlisted to help, he added.

On road safety, Comm Kamarul Zaman said Ops Selamat preparations had identified a total of 61 congestion and 38 accident hotspots throughout the state.

These areas would be given priority for traffic control and safety surveillance during the 10-day operation, which begins on Wednesday (Jan 18).

"Those who will be going back to their hometowns to celebrate with their loved ones are encouraged to inform the nearest police station.

"We will look after your property, including business premises, to make sure no one takes the opportunity to break the law," he said.

Only 10% of the state police contingent would be allowed to take leave for Chinese New Year, he added. 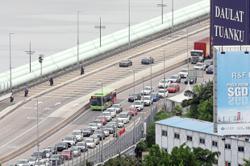