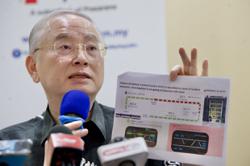 KUALA LUMPUR: Commuters should expect a spate of occasional disruptions on the country's most used metro line, the Kelana Jaya LRT, until new train sets arrive while work is ongoing to rehabilitate 18 existing ones, says Anthony Loke.

The Transport Minister said a full report on the cause behind the five-day shutdown of the line involving 16 critical stations from Nov 9-13 will be ready soon.

"The report, by an independent consultant, WSP, will be submitted to Cabinet in a few weeks. I have also asked for the report to be made available to the public," he said upon his maiden visit to Prasarana since assuming his former post on Dec 3.

Loke first became Transport Minister on May 21, 2018, when Pakatan Harapan won the 14th General Election, but stepped down on Feb 24, 2020, following the Sheraton Move.

“We are doing everything we can to make sure the disruptions do not happen frequently, and the Prasarana team is committed to that," he said at the press conference on Thursday (Dec 8) morning where he was accompanied by Prasarana group CEO, Mohd Azharuddin Mat Sah.

There are 56 train sets for the Kelana Jaya line, but 18 are under maintenance, with work being slowed down by the disruption to the supply chain caused by prolonged Covid-19-shutdowns, especially to factories manufacturing components for the train's tachometers.

Tachometers are a critical safety component that regulates the speed of automated trains, with faulty tachometers capable of triggering the train protection system to shut down running trains as a safety precaution.

These tachometers are imported items that are assembled in Europe but using components sourced from elsewhere.

Loke also said that everything is being done to ensure that the KJ Line service frequencies will go back to three minutes between each train, as he urged the public to bear with the situation until new trains arrive next year to boost the renewed fleet. 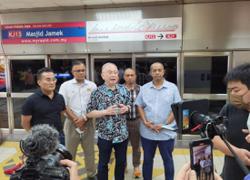