Abdul Aziz’s death was confirmed through a post on the official Facebook page of Tan Sri Muhyiddin Yassin who is also the Pagoh MP on Tuesday (Dec 6).

In the Facebook post, Muhyiddin said he was saddened by the death of his brother at 9.50am today.

"I and my family are saddened by the passing of Tan Sri Abdul Aziz Yassin today. I have lost a brother who had assisted me a lot during my younger days. He had always supported me. May his soul rest in peace.

"May Allah shower mercy on his soul and place him among the righteous,” said Muhyiddin.

Funeral prayers will be held at the Muadz Ibn Jabbal Mosque in Kuala Lumpur. The remains will be buried at the Raudhatul Sakinah Muslim cemetery in Gombak this afternoon.

Abdul Aziz, who was born in Muar on Oct 27, 1932, was the Muar Member of Parliament for one term after winning the seat in the 9th General Election held in 1995. 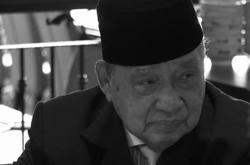