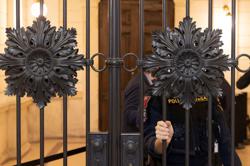 KAJANG: A jobless man has been charged in the magistrate’s court here with the murder of his stepdaughter.

No plea was recorded from the accused after the charge was read out to him before magistrate Nik Siti Norazlini Nik Mohamed Faiz, Bernama reported.

The court fixed Jan 10 for mention.

It was reported earlier that a Hospital Serdang medical officer lodged a report on Nov 22 at about midnight about a child being brought to the hospital in an unconscious state. The victim was later confirmed to have died on the way to the hospital.