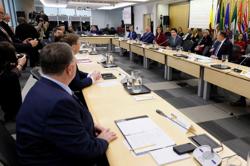 Market price: A price list of vegetables at a stall at Pasar Borong Selangor in Seri Kembangan. — AZHAR MAHFOF/The Star

PETALING JAYA: There is no silver bullet solution to the cost of living crisis, says an economist, as they point to multi-pronged approaches that will need to be taken by the government.

But before coming up with a framework of paradigm-shifting measures, serious research must first be done to gather data from consumers, retailers, and micro, small and medium enterprises, said Prof Dr Barjoyai Bardai of Universiti Tun Abdul Razak.

“This is so that there will be no mismatch between consumers’ needs and the policymakers’ solutions.

“In some cases, consumers may look at things differently than what the administrator is thinking. So we need to have real, concrete data from the ground, and from there, we identify what are the important things to address.

“Right now, we’re really at a loss as to what the concerns of the households are and where they are,” Prof Barjoyai said when contacted.

Prime Minister Datuk Seri Anwar Ibrahim has given a two-week time frame from Nov 27 for government agencies to look into strategies for addressing rising cost of living, including the proposal of targeted subsidies for lower income individuals and improving incentives for the private sector.

The premier said addressing the rising cost of living as soon as possible is his top priority as it involves the lives of the rakyat.

Prof Barjoyai said: “There is also a need for the government’s Special Jihad Team to Tackle Inflation to be strengthened.”

He said the setting up of the special team should be equivalent to the government’s Special Committee to Address Covid-19, which met every week and came up with reports frequently.

“There is also a need to look into cartels and stop their anti-competitive practices and transactions that unnecessarily raise the prices of basic necessities such as eggs, chicken and meat.

“Cartels are working strongly because suddenly you see an influx of eggs in the market when before this there was a shortage, and it’s the same thing with chicken.

ALSO READ: Give targeted subsidies to the vulnerable, govt urged

“All this needs to be understood and addressed,” he said.

With the government mulling rolling back blanket subsidies in favour of channelling targeted support to lower income groups, Prof Barjoyai said there are some targeted subsidies that must be analysed.

“Targeted petrol subsidies have been an idea floated for more than a decade, but due to a lack of microdata to target the needy groups, it was not able to be implemented.

“However, the data is available; it’s just a matter of streamlining it. Today’s world is that of big data analytics, so it is possible to get the data so it can be used for the fuel subsidy programme,” he said.

On targeted subsidies to help lower income families with their grocery bills, Prof Barjoyai said it could be as basic as giving food stamps but it should be more sophisticated than in the United States, where real stamps are used.

“We can use a card or just an identification number, and the amount can be credited to certain needy groups so we can ensure they can afford to have food on the table every day.

“Same thing with petrol. If we target motorbike users and small cc (engine capacity) car users, we will be able to identify them and provide a mechanism to credit their accounts on a weekly or monthly basis,” he said.

Prof Barjoyai said the two-week time frame given by Anwar on Sunday to government agencies was not meant to force civil servants to come up with a concrete proposal immediately.

“It’s meant to propose a restructuring of the mechanism, identify some items, and so on, but there is still some work to be done before they can come out with a proposal,” he said.

Middle income earners feel like they are also poor

Give targeted subsidies to the vulnerable, govt urged

Lure of the Singapore dollar