Middle income earners feel like they are also poor

GEORGE TOWN: Despite earning a decent household salary, the tight monthly budget has made Amir Osman Mohd Ibrahim feel like he belongs to the bottom 40 (B40) income group.

The father of three children – aged four, eight and 13 – can barely save money as the cost of living has gone up tremendously in the past few years.

The 45-year-old Information Technology engineer and his wife earn a gross monthly income of RM8,000.

“We used to spend RM50 for three days of food and now, we are paying double for the same amount of items.

“My children are growing up and I have to pay for their tuition classes and kindergarten fees as well,” he added.

Amir Osman noted that the line between the B40 and middle 40 (M40) groups is thin.

He hopes the government can take into consideration the financial burden faced by families like his, which fall between the two categories.

“That will help a lot because families like us are usually not eligible for any incentives or relief aid given by the government,” he said.

As a matter of fact, Amir Osman has shelved the idea of buying a bigger house. Also, the family’s weekly outing has been downgraded to once every fortnight.

Meanwhile, performing arts technician George Marvin Dass had plans to buy an apartment at the age of 50.

With just four more years to go, he is not sure if the dream can come true.

“I am single and fall under the M40 category. Yet, the rising cost of living has made it difficult for me to save up,” he said.

In order to achieve his goal of owning a home, Dass, 46, had cut down on dining out after noticing that hawker food prices were progressively more expensive, or the serving sizes had shrunk to the point that he had to order more.

He hopes the new government is able to revive the economy.

“It will be great if there are ways to bring down the prices of goods so that we do not feel the pinch.

“If the economy improves, the M40 group will benefit as well,” he added.

Dass also called for the establishment of more affordable housing projects so that everyone could live in their own homes.

Give targeted subsidies to the vulnerable, govt urged

Lure of the Singapore dollar 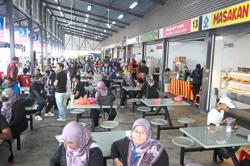