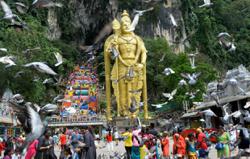 PETALING JAYA: Various parts of Kuala Lumpur have been affected by flash floods due to the afternoon downpour on Wednesday (Nov 30).

There are also reports of the Bandar Tun Razak exchange at East–West Link Expressway (Salak Expressway) towards Taman Connaught, Cheras being affected by flash floods.

All traffic in these areas have been badly affected due to obstructed lanes.

So far, reports on social media indicate that vehicles are still able to pass the affected roads.

Also, reports state that there is partial closure of lanes due to flash foods at Lebuhraya Sultan Iskandar and Jalan Ampang (in front of Bangunan Santa Grande).

Kajang Dispersal Link Expressway (SILK) is experiencing traffic congestion due to flash floods. Total lane closure at the interchanges of Sungai Ramal-Sungai Balak and Putrajaya-Sungai Ramal. Traffic from Putrajaya has been diverted to Persiaran Country Heights and Bandar Baru Bangi.

Also, traffic from Putrajaya has been diverted to Persiaran Country Heights and Bandar Baru Bangi.