PONTIAN: No one in Umno or Barisan Nasional has to resign over the results of the 15th General Election (GE15), says Datuk Seri Ahmad Maslan.

The Umno secretary-general said Umno and Barisan leaders should instead reflect on the defeat and work on closing ranks.

"If people were to take responsibility for what happened and resign, then many should do so. This includes the more than 7,000 voting district chairmen, state liaison chiefs, Youth chiefs, Wanita chiefs and Puteri chiefs.

"Do all of them have to resign? There is no need for us to call for anyone's resignation. Instead, we should reflect on the results," he told reporters after a dialogue session with Umno grassroots leaders in Rumah Citra Sri Pinang, Benut on Sunday (Nov 27).

He had been when asked to comment on calls for Barisan chairman and Umno president Datuk Seri Dr Ahmad Zahid Hamidi to resign following the devastating results of GE15 where the coalition only won 30 seats.

On a separate matter, Ahmad Maslan urged all Umno divisions to hold dialogue sessions with the grassroots to answer questions they may have following GE15.

"We need to be honest and explain (the situation) to them through sessions where they are free to ask questions.

"I hope that these sessions could be held (soon), once the Cabinet has been formed," he said. 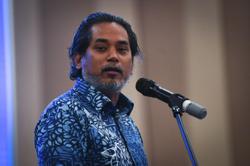