KUCHING: Gabungan Parti Sarawak (GPS) has given its backing to the unity government to be formed by new Prime Minister Datuk Seri Anwar Ibrahim.

“On Nov 23, the Yang di-Pertuan Agong summoned GPS for an audience and the GPS delegation was led by Datuk Seri Fadillah Yusof.

“His Majesty advised the formation of a unity government to overcome the political turmoil.

Asked if this meant GPS would be part of the unity government, he answered yes.

“What’s happening now is the swearing-in of the Prime Minister.

Usually the formation of a government is the prerogative of the Prime Minister.

Surely the new government must take into consideration the advice of the Yang di-Pertuan Agong,” he said.

Abang Johari declined to reveal whether Anwar had contacted him at any point on Wednesday or yesterday. Asked whether the unity government would have enough support without GPS’ participation, Abang Johari said he did not know.

“But what the Yang di-Pertuan Agong wants is a strong and stable government,” he said.

To a question on whether GPS would ask for a deputy prime minister’s post, Abang Johari said “we’ll see”.

“But you must remember we are the biggest bloc (with) 23 MPs.

If you compare with the other parties, we are a big bloc,” he added.

In an indication of thawing ties with DAP, which has had a strained relationship with GPS, Abang Johari also acknowledged the open apology by DAP secretary-general Anthony Loke and national chairman Lim Guan Eng for any statements made by the party’s leaders in the past which offended the state government and Sarawakians.

Loke had paid a courtesy call on Abang Johari and other GPS leaders here yesterday morning to make the apology.

Abang Johari said Loke did not make any other offers to GPS during the meeting.

“What is important is that DAP apologised and acknowledged their mistake.

They also said they wanted to open a new chapter.

“But at the same time they must respect our component party SUPP,” he said.

Abang Johari also said that any cooperation between GPS and DAP at federal level would not affect the state’s political landscape.

He said DAP was not part of the state government and would remain in the Opposition at state level. 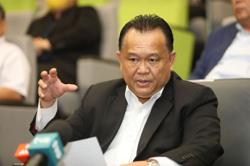