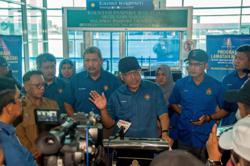 LABUAN: The one-month feud over stricter immigration checks at the Labuan roll-on, roll-off (ro-ro) ferry terminal will be resolved by the end of this month with the implementation of a drive-through immigration checkpoint at the main entrance of the terminal, says Labuan Corporation chief executive officer Rithuan Ismail.

The implementation of the new immigration checkpoint would help ease traffic flow at the terminal and ease the convenience of ferry commuters.

“We have come to a decision after considering the grievances of the people travelling to mainland Sabah via this terminal.

“We have received non-stop complaints from travellers over the newly-implemented policy from day one of its implementations, and we understand the situation owing to the limited space in the terminal building and the narrow road towards the ferry,” he told reporters after a visit to the terminal with officials from the Labuan Immigration Department, Marine Department and Customs here yesterday.

The proper immigration counter at the terminal should be strategically placed as such checks could be permanent, he added.

Rithuan also said the ferry ticket counter, currently inside the restricted and protected terminal area, would be shifted outside of the terminal.

“When the drive-through check concept is implemented, drivers and passengers will be able to remain in their vehicles and only need to produce their identification cards or other valid travel documents to our on-duty staff,” he said.

The Home Affairs Ministry on Sept 10 had directed the Immigration Department to enforce stricter control at the two Labuan ferry terminals, especially for non-Sabahan travellers bound for the Sabah mainland.

Its former minister Datuk Seri Hamzah Zainudin said stricter control was needed to ensure there would be no free flow of travellers at the main gate of the ferry terminals to mainland Sabah via Tanjung Pagar Sipitang, Menumbok and Jesselton jetties.

The stricter immigration checks at the terminals were at the request of the Sabah government, as there had been issues with the abuse of the free flow policy at the terminals, which had resulted in entry into Sabah being out of control, he added.

The stricter immigration checks at the terminals commenced on Nov 1, sparking anger among travellers commuting via the ferry service to mainland Sabah, who claimed the new policy had given “travellers and commuters a hard time”.— Bernama