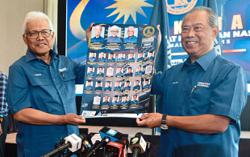 They are believed to be there to discuss on forming the federal government following the extension given by the Yang di-Pertuan Agong Al-Sultan Abdullah Ri'ayatuddin Al-Mustafa Billah Shah yesterday for political parties to prove their majority for the formation of a new government and nominate a Prime Minister candidate by 2pm today.

The country's political turmoil following the 15th General Election (GE15) entered its third day today after the election results showed that no political party has been able to obtain a simple majority of 112 parliamentary seats to form a new government.

Meanwhile, Hamzah in a statement yesterday informed that PN has submitted more than 112 statutory declarations from members of the Dewan Rakyat who are supporting Muhyiddin, also the MP for Pagoh, as the 10th Prime Minister. - Bernama

Istana Negara the centre of attention again on Nov 22

From villain to ‘King Zahid’

GRS backs Muhyiddin as PM but others stay mum