"I resign as the Umno state chief because the party has lost faith in me. I have also lost confidence in the party president," he told reporters when met after attending the Umno political bureau meeting at Menara Dato Onn at the World Trade Centre on Sunday (Nov 20).

However, he added that he remains as an Umno supreme council member.

"I will be attending the supreme council meeting," he added.

He said the Umno supreme council meeting - which was scheduled to be at 3pm at the same venue - has since been postponed.

He expressed disappointment at being dropped by the party president Datuk Seri Dr Ahmad Zahid Hamidi instead of defending his seats.

"It seems that he had lost confidence in me and did not appreciate my efforts to help Selangor," he said.

Asked if there would be any further resignations, he said that he did not want to speak for other leaders.

The Tanjong Karang seat had been an Umno stronghold for six terms, but fell to Perikatan Nasional's Dr Zulkafperi Hanapi.

Noh Omar won the seat in 1995 and had successfully defended it in the 2018 polls.

He was dropped by Umno to defend his Tanjung Karang parliamentary seat in the 15th General Election and replaced by Habibah Mohd Yusof, also from Umno. 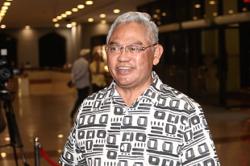