SEREMBAN: A 41-year-old trader was fined RM1,000 after he pleaded guilty at the Magistrate’s Court here to a charge of using criminal force against a journalist covering the campaign of an election candidate.

S. Subramaniam did not contest the charge when it was read to him before magistrate Mohamad Ibrahim Mohammd Ghulam.

The accused was charged with committing the offence against Muhammad Irfan Syahmi Mohd Yazzed at a restaurant in Seremban Jaya around 7pm on Nov 11.

He was charged under Section 352 of the Penal Code which provides a jail term of up to three months or a maximum fine of RM1,000 or both upon conviction.

When Muhammad Irfan, who was covering the campaign of Barisan Nasional candidate Ng Kian Nam for the Rasah parliamentary seat, entered the restaurant, the accused who had been drinking with a group of men threatened them and ordered them to leave.

The duo and Ng’s election workers ignored the accused who later told them to get out of the restaurant.

When they started recording the incident, the accused pushed Muhammad Irfan and then threw a glass, bottle and footwear at him.

He continued to harass them even outside the restaurant. 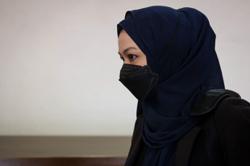