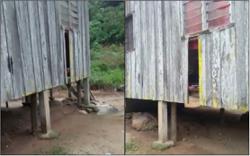 IPOH: A man was killed after being attacked by a wild boar near Jalan Kampung Paya Ara in Pantai Remis, about 90km from here.

"We received a call about the incident around 7.05pm.

"The man was on his way to his farm prior to the incident," he said in a statement.

"There were also two other men, aged 49 and 60, who were injured while trying to help the victim," he said.

The spokesman said its personnel had assisted the police by providing lighting while hunting the animal.

"The animal was later shot dead by the police,” he added.