She also said that all matters regarding the party's president would be resolved internally by Nov 5, before the GE15 nomination day.

"The party just had a meeting about our preparation ahead of the GE15.

"We announce today that PBM will go solo in the elections and won't cooperate with any coalition," she told a press conference at the party's headquarters in Ampang, Kuala Lumpur on Sunday (Oct 30).

When asked if Barisan Nasional had refused to work with PBM, Zuraida said the decision to go solo was taken after talks of cooperation with Barisan fell through.

"There are terms and conditions that cannot be fulfilled.

"So we have decided to go solo," she said, adding that PBM would use its own logo and party flag in the national polls."

She also said PBM is defending its six incumbent federal seats and contesting in one state seat in GE15.

When asked, Zuraida deviated from answering questions on who is the party's legit president, saying that "all matters would be resolved internally."

Asked about who was now giving instructions to the party, Zuraida said, "No instructions. But we will settle things internally."

Asked if the media should contact her or Datuk Larry Sng for statements related to GE15, Zuraida said, "Since I'm here, it's me then."

When pushed further if she would also sign the party's appointment letter (surat watikah) for candidates to contest in GE15, she told the media "not to worry and it can be solved internally."

"Everything will be settled at the party level. So no need to speculate. Just wait for the official announcement," she added.

He said that the tussle within the party for the president's post must be resolved internally. 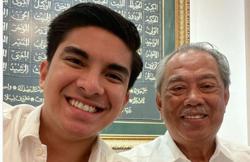