IPOH: All six victims of the helicopter crash in Cameron Highlands have been found alive, five of whom suffered light injuries while another has a broken femur.

"All were found safe in the hills in Brinchang at about 4pm.

"Efforts to get the victims out of the area are ongoing by search and rescue personnel," he added.

The helicopter, believed to be carrying medical personnel and equipment, is said to have crashed at about 1pm.

The helicopter was on its way to Tanjung Rambutan here from Kampung Gawin, Kelantan. 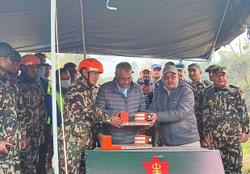