KUALA LUMPUR: Malaysia’s gross national income (GNI) from clinical trials is expected to surpass RM1bil next year, about 10 years after such initiatives began in the country.

For this year, Khairy said clinical trials have contributed about RM89mil in income thus far, against the targeted RM125.8mil.

Next year, the number of industry sponsored research carried out including those sponsored by pharmaceutical companies and global clinical research organisations will cross the 2,000 mark.

"Besides monetary income, clinical trials and research are very valuable because of the exposure it gives our scientists and researchers to craft and conduct tests on patients based on the latest treatments available," he told reporters at a press conference after the CRM Trial Connect 2022 conference here on Friday (Oct 14).

"All these treatments must undergo stringent regulatory processes which will guarantee the safety of the treatment given to the participants of the process.

"It also gives early access to patients in Malaysia, especially those with rare diseases. They will be able to get the first treatment in the world," he added.

He said such projects would also allow Malaysia to work with other countries.

"I expect the clinical trial industry to grow rapidly. We have set a target that Malaysia will be number one in industry sponsored trials in five years. This will elevate our clinical research infrastructure to world class standards," he added.

The clinical research centre at the Sarawak General Hospital has two First in Human (FIH) trial projects in the pipeline for next year. 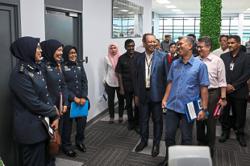