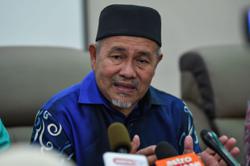 AMPANG: Perikatan Nasional ministers sent a letter to the King to state their disagreement for the general election to be held this year due to the forecast of a severe monsoon, says PAS deputy president Datuk Seri Tuan Ibrahim Tuan Man (pic).

Tuan Ibrahim, who is also the Environment and Water Minister, said the letter was sent on Wednesday night after a meeting of all the party components of Perikatan in Shah Alam.

He confirmed that the palace had received the letter on the same night.

“Yes, we sent such a letter to Yang di-Pertuan Agong Al-Sultan Abdullah Ri’ayatuddin Al-Mustafa Billah Shah. However, we have yet to receive a reply,” he said.

He spoke to the media after briefing the King on the northeast monsoon forecast and national preparedness for possible floods at the National Flood and Forecasting Centre of the Irrigation and Drainage Department here yesterday.

At a Perikatan event on Wednesday night, it was revealed that the letter dated Oct 3 was signed by the 12 Cabinet ministers of Bersatu and PAS to state that they were against the general election being held this year.

The letter stated the Meteorological Department’s forecast of a severe monsoon and to allow the nation’s economy to recover.

Perikatan has repeatedly stated they disagreed with holding the polls during the flood season.

PAS has even decided that all three state assemblies under its rule will not be dissolved until the monsoon is over in March next year.

Later in the evening, Perikatan component party heads once again met for their presidential council at Bersatu’s headquarters.

Bersatu deputy president Datuk Seri Ahmad Faizal Azumu, who is also the Sports and Youth Minister, said that it was a scheduled meeting between the component party heads of Perikatan and was nothing out of the extraordinary.

“It is a scheduled meeting. We have meetings all the time,” he said.