KOTA KINABALU: The increased allocation for Bornean states in Budget 2023 shows that the Federal Government has considered what the Special Council on Malaysia Agreement 1963 (MKMA63) brought forward.

He said there was a marked increase for Sabah and Sarawak compared with the previous year.

“Despite the challenges on the revenue receipts, the allocations did not divert from meeting the basic needs of the people, of which RM6.3bil was allocated for the development of Sabah and RM5.4bil for Sarawak.

“For rural development, a total of RM1.5bil was allocated for Sabah and RM2.55bil for Sarawak.

“For Sabah and Sarawak, the development needs and focus highlighted by the Special Council on MA63 have been acted on and provided for, including providing development allocations for poverty and the B40 group.

"More importantly, funds for basic infrastructure have been maintained, and in some cases, increased especially for rural roads, water and electricity, and digital infrastructure.

“The MKMA63 stressed on the need for increased allocation for medical and educational facilities, especially addressing dilapidated rural schools and clinics, which is highlighted in this Budget,” he said in a statement.

The Kota Marudu MP added that concerns on border security, especially on assets and the speedy construction of the Customs, Immigration, Quarantine and Safety (CIQS) centres along the Sabah-Sarawak-Kalimantan border districts have been acted on and given serious financial attention.

“And the focus on economic recovery is spot on. The extra push for the revival of manufacturing and tourism sectors are both timely and much needed,” said Ongkili.

He said that stronger voices for attention and financial focus from Sabahans and Sarawakians are now increasingly being heard, respected and acted on.

"Having said that, the room for further improvement is still huge.

“Although there is an increase in allocation, it is still not satisfactory and up to the level, based on the requests from Sabah and Sarawak.

“While we are grateful with the increasing openness of the Federal Government in providing better allocations, especially for rural development, we will continue to utilise MKMA63 as a platform to press and push for basic development needs for both states," Ongkili added. 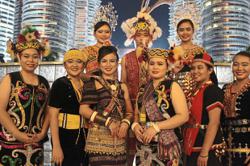