The process was all done by the book, said AmBank’s non-independent and non-executive director Cheah Tek Kuang, who helped Najib open the current account.

The 75-year-old prosecution witness, reading his statement during the 1Malaysia Development Bhd (1MDB) trial yesterday, recalled how he was first informed by Najib’s AmBank relationship manager Joanna Yu that the Pekan MP wanted to open a bank account.

Yu had asked him as the then-managing director to handle the process.

Cheah said he had no qualms handling it, but he also felt that it was appropriate for his superior, AmBank chairman Tan Sri Azman Hashim, to be the one asking for Najib’s signature on the forms.

According to Cheah, Azman declined and instructed him to meet with Najib.

The process to open Najib’s account, Cheah said, was quite special due to his stature as the prime minister at the time.

The cheque book, credit card and opening forms were prepared all at once as Cheah said a meeting with the prime minister would not come by easily and all the processes had to be done in one go.

He could not recall when he met Najib at his Bukit Tunku home, but said that during the meeting, Najib mentioned the money that was coming into the new account.

“Najib said the money was a contribution from the Saudi Arabia government for his ‘Islamic activity’,” the witness said.

After the meeting with Najib, Cheah set up a meeting with Zeti to inform her about the opening of the 694 account and the incoming US$100mil from Saudi Arabia.

Cheah said only he and Zeti were at the “secret meeting” as it involved the interest of the then prime minister.

“It was pertinent for me to inform Zeti as it involved a politically- exposed person.

“Zeti took note of the matter and asked that it be done in accordance with the regulations of the bank and the central bank,” he added.

Following the meeting with Zeti, Cheah said he handed over all operations to Yu and the operations department chief, Ross Foden.

“Foden and his team suggested that they monitor the account with a special code name as it was a sensitive account and to avoid any information leaks like what had happened to Public Bank in the National Feedlot Corporation case.

“I agreed to the code name ‘AmPrivate Banking – MR’ for Najib’s account to avoid misuse of private information,” Cheah said.

A letter was also sent to Zeti to inform her of the code name, which would make it easier for the central bank to monitor the account.

“I am not sure if Najib knew about the code name, but this is a matter that falls under the bank’s operation, hence it was the operations’ duty to choose the codename,” he said.Cheah, whose contract as managing director ended in 2012, said that after the opening of the account, he was no longer involved.

He was later appointed as the bank’s non-independent and non- executive director. 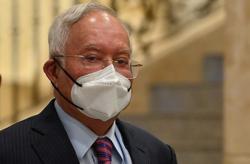