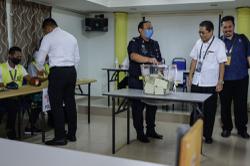 MELAKA: The Civil Defence Force (APM) is on a double footing to face flooding during the Northeast Monsoon (MTL) and also the possibility of the 15th General Election (GE15) this year.

"If GE15 takes place during the MTL, we at APM are ready to help the Election Commission (EC) ensure a smooth voting process and this will not be the first time as we have done this before in GE14.

"We have put together a strategic plan on how to smoothen the execution of tasks in both of these situations," he said after officiating the Melaka 2022 APM Townhall Meeting at the Ayer Keroh Ministry of Home Affairs (KDN) complex here Wednesday (Oct 5).

He said a total of 10,510 APM members and officers throughout the country will be mobilised for the implementation of both tasks with the logistics of 481 land vehicles such as four-wheel drives and lorries and 759 water vessels like boats.

He said in addition, APM assets that will be mobilised according to the needs of flooded areas are 5,772 life jackets, collapsible tents (64,310 units) and generators (144 units).

Norhafifi said APM members from states spared by floods will be moved to affected states so that effective assistance in relocating for rescue of victims can be done speedily.

In the meantime, he said residents who live in flood-prone areas are advised to be prepared to evacuate at short notice and not wait for instruction from the authorities.

"Residents are also advised to prepare 'ready to go' bags containing basic necessities, documents and food supplies in case they have to evacuate," he said.

He said a total of 6,010 temporary relocation centres (PPS) across the country had been gazetted under the Department of Social Welfare, of which 138 PPS are in Melaka.

He said supervision including aspects of hygiene have been laid for fast activation of PPS.

He said APM also aims to train at least 10 per cent of the 32 million population in the country in the basics of disaster management, including aspects of rescue, medicine and fire-fighting through the Civil Defence Emergency Response Team (CDERT). - Bernama 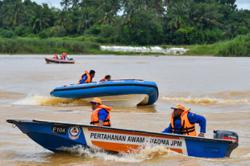