PETALING JAYA: A consensus has been reached by Umno's "top five" on the dissolution of Parliament which will pave the way for the 15th General Election, says party deputy president Datuk Seri Mohamad Hasan.

"A consensus was reached for the party to move forward," he said after the meeting involving Umno's "top five" at the KL World Trade Centre (WTC) on Friday (Sept 30).

However, it is unclear whether the consensus involved the exact date Parliament will be dissolved.

Talk has been rife that Parliament could be dissolved between Oct 10 to 14.

Earlier, Khaled told reporters that the meeting went smoothly and all matters would be brought to the supreme council meeting later on Friday for approval.

According to sources, the consensus was reached between Umno top leaders during the party's political bureau meeting earlier in the day.

"They are looking for a November election. So it could be dissolved by the second week of October," said the source.

The 14th Parliament's term will expire on July 6 next year. According to the Federal Constitution, a general election must be called within 60 days after the dissolution of Parliament.

Other states such as Penang, Kedah, Kelantan and Terengganu have so far indicated that they will complete out the full term and not dissolve their state assemblies early. 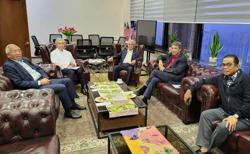