The Umno Youth chief said in that case, it would be better for the mandate to be handed back to the people to vote in a government of their choice.

“Do such threats give a positive perception to industry players or even local and foreign investors?

“Giving the mandate back to the people, in turn, helps restore the trust and confidence of investors to ensure the nation’s economy will be steered in a stable manner for the benefit of the people,” he said in a Facebook post on Friday (Sept 30).

“Bersatu president Tan Sri Muhyiddin Yassin’s declaration of war against Barisan Nasional is a clear indication that Bersatu does not have confidence in the current government,” he said.

Waytha Moorthy had added that despite Bersatu leaders being in the current Cabinet, Muhyiddin’s statement indicated there was no guarantee that Bersatu would support Budget 2023, which is scheduled to be tabled in Parliament next Friday (Oct 7).

On Monday (Sept 19), Muhyiddin said that it was better for the Prime Minister to call for a general election if the country's economy is not managed properly.

He said that Prime Minister Datuk Seri Ismail Sabri Yaakob could not be oblivious to the slide of the ringgit – which affected the import of food.

However, Muhyiddin, who is also Pagoh MP and National Recovery Council (NRC) chairman, said he was not pushing for an early election.

Following this, Prime Minister Datuk Seri Ismail Sabri Yaakab rebuked Muhyiddin, saying that the latter was just as responsible for any of the government’s shortcomings.

Ismail Sabri said if the government was said to have failed to manage the country, it meant that Muhyiddin had also failed in his role as the government’s adviser.

“Minister in the Prime Minister's Department (Economy) Datuk Seri Mustapa Mohamed (from Bersatu) is managing the economy, and we have the NRC, which is chaired by Muhyiddin himself. 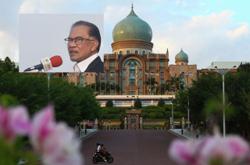