GOMBAK: Three police reports were lodged of alleged attempted kidnappings in front of a primary school in the district.

However, all incidents turned out to be false and did not occur.

"The police reports stated that each complainant was told by their children - two nine-year-olds and a seven-year-old - that a man attempted to kidnap them outside of their school," he said in a statement on Thursday (Sept 29).

The investigation led police to the front of the school where the incident allegedly occurred after school ended.

The area was filled with school buses and vehicles belonging to parents of pupils, he said.

"We identified and interviewed vital witnesses including the complainants, other pupils, security guards, traffic warden, the headmaster and the Parents and Teachers Association president. We also collected CCTV footage.

"All witnesses confirmed that the alleged incidents did not occur," he said.

Supt Noor Ariffin advised the public not to speculate or spread unverified news that could jeopardise public order.

"We also advise the public not to be influenced by the spread of fake news or spread it further as action can be taken under Section 505 of the Penal Code and Section 233 of the Communication and Multimedia Act 1998," he said. 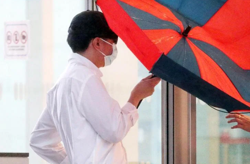