KUALA LUMPUR: Seven individuals have had their statements recorded at the Dang Wangi district police headquarters in connection with the #nyawadulubaruPRU assembly here last week.

Bernama had earlier reported that police had opened an investigation paper under Section 9 (5) of the Peaceful Assembly Act 2012 as the assembly in front of a shopping centre in Jalan Tuanku Abdul Rahman was held without notice.

The assembly was held to protest the possibility of the general election being held during the flood season. – Bernama 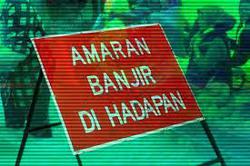