KUALA LUMPUR: The Attorney General’s Chambers (AGC) has filed a notice of appeal in the case of Datuk Seri Dr Ahmad Zahid Hamidi, who was acquitted of 40 corruption charges involving the Foreign Visa System (VLN).

A source who wished to remain anonymous confirmed the notice was filed at 4.40pm on Monday.

On Friday, the Shah Alam High Court acquitted the former deputy prime minister of all 40 charges.

Trial judge Justice Mohd Yazid Mustafa held that the prosecution had failed to prove a prima facie case against Ahmad Zahid and made the order for a discharge and acquittal.

The judge said the main reason the prosecution’s case against Ahmad Zahid failed was that the three main witnesses lacked credibility. The court also doubted the credibility of a ledger – tendered as evidence – as there was some missing data regarding the inflow and outflow of funds allegedly delivered to Ahmad Zahid.

On the same day, Attorney General Tan Sri Idrus Harun said that the AGC would study the grounds for acquittal before deciding to appeal against the court’s decision.

During the trial of his case, which began on May 24, 2021, Ahmad Zahid pleaded not guilty to 33 counts of receiving bribes amounting to S$13.56mil (RM42mil) from UKSB for himself as home minister to extend the contract of the company as the operator of a one-stop centre (OSC) in China and the VLN system, as well as to maintain its contract with the home ministry to supply the VLN integrated system.

He was charged with committing these offences at Seri Satria, Precinct 16, Putrajaya, and Country Heights, Kajang, between October 2014 and March 2018. 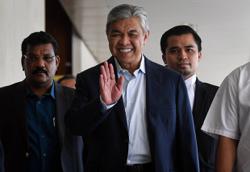