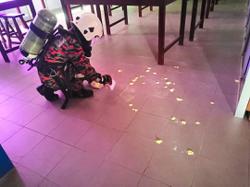 A fireman placing sulphur powder on the spilled mercury.

KOTA KINABALU: A 16-year-old student suffered minor injuries to her hands after coming in contact with mercury at a secondary school in Papar.

The incident occurred when a thermometer broke at SMK St Mary school laboratory at about 9am on Monday (Sept 26), said Papar fire station chief Roslie Jun.

"We received a call at 9.26am but by the time we reached the school, a teacher had already taken the student to the Papar Hospital," he said.

He said school authorities told him the girl developed rashes on her hands and they quickly sent her to the hospital.

Roslie said the firemen immediately cleaned up the spilled mercury with sulphur powder and disposed of the residue safely.

He added the operation ended at 10.13am.

In a separate incident, a teacher from SK Pekan Tenom in the interior Tenom district saved his school from further damage after he put out a main electric switchboard fire.

"We did not need to put out any fire as the teacher had already doused the flames using a fire extinguisher.

"The fire team only had to inspect the switchboard to ensure there was no further risk of fire and the situation was brought under control at 8.12am," he said, adding the operation ended at 8.35am. 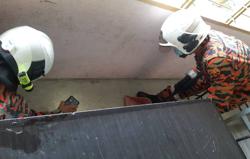