My prison experience was much tougher than Najib's, says Anwar 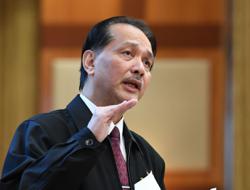 PETALING JAYA: Datuk Seri Anwar Ibrahim (pic) says his experience in prison included years in solitary confinement, and was quite different from what Datuk Seri Najib Razak is going through.

"I was in prison for (years) before being allowed treatment at the Cheras Rehabilitation Hospital (CRH)," the Opposition leader said, referring to calls by Najib's supporters that the former prime minister was entitled to the same treatment while in prison as Anwar received.

"I was in solitary confinement for (a total of) 10 years ... and was given treatment at CRH ... only after my shoulder surgery," he told a press conference at the Foreign Correspondents Club of Thailand in Bangkok on Thursday (Sept 22).

"My physical ailments were well explained during my incarceration, which is not the case wirh Najib.

"If he (needs) to be treated and if the doctors ascertain he is sick, I would not make it an issue," he said, adding that Najib should serve his time in prison while awaiting medical diagnosis.

"I had to sleep on a cement floor, which aggravated my back problems, and was given a bed on doctors' advice," Anwar continued, dismissing claims that he received VIP treatment in prison as "utter rubbish".

ALSO READ: Anwar will be released directly from hospital without returning to prison

"On a personal level, we have been friends for decades ... Najib represented the upper class and aristocrats, and I came from the village.

"I was the Umno Youth chief and he was my deputy.

"I certainly wouldn't want him to endure suffering beyond his penalty but (we) must differentiate personal concerns (and) accept the rule of law and the punishment," he said.

Najib is serving a 12-year jail sentence for corruption after the Federal Court upheld his conviction and fine in the SRC International case on Aug 23.

Health director-general Tan Sri Dr Noor Hisham Abdullah had said earlier that only the court can be privy to the details of Najib's illness.