‘Zahid told me to monitor Mazlina’

The executive secretary, Major Mazlina Mazlan @ Ramly, was then asked to show credit card statements and cheques to Major General (R) Datuk Fadzlette Othman Merican Idris Merican first before they could be brought to Ahmad Zahid for his signature.

Fadzlette, who is now Ahmad Zahid’s media director in his capacity as Umno president, told the High Court that she knew of the issues involving prosecution witness Mazlina from her boss.

“He asked me to monitor Mazlina as I am of a higher rank than her,” she told Ahmad Zahid’s Yayasan Akalbudi (YAB) corruption trial here yesterday.

The second defence witness said Mazlina would always give excuses and never showed her the statements and cheques as requested.

“This situation continued and due to my official duty, I also overlooked monitoring her or following up on the matter,” she said.

Fadzlette, who was reading her witness statement, also testified that she knew that Mazlina had control of the signature stamp for Ahmad Zahid.

“This signature stamp was meant for a limited use, only for stamping on certificates of recognition and festive greeting cards.

“I know this because I had brought several certificates of recognition to Mazlina to have them stamped with his signature, on his order,” she said.

The witness, a long-time staff member of Ahmad Zahid, also said the Bagan Datuk MP was a generous man.

Fadzlette said Ahmad Zahid would never say no to any request for donation, adding that he was not one to check the amount he was parting with.

“There was one time, after giving a handout, Ahmad Zahid asked me: ‘how much did I give, ya?’,” she said.

The court had previously heard Mazlina’s testimony during which she said Ahmad Zahid had allowed his signature stamp to be used on YAB’s cheques to pay for his credit card bills.

Ahmad Zahid had said in his testimony in May that he never instructed Mazlina to use YAB cheques to pay for his credit card bills.

He said Mazlina had committed negligence in handling his personal expenses as well as finances involving YAB.

Cross-examined by Deputy Public Prosecutor Datuk Raja Rozela Raja Toran, Fadzlette was grilled on her statement that she had requested Mazlina to first show her Ahmad Zahid’s credit card statements and cheques before getting his signature.

The witness gave answers that the prosecutor was unsatisfied with, causing the two to go back and forth as the DPP pressed on.

Ahmad Zahid’s lead counsel Hisyam Teh Poh Teik then stood up to object, saying Raja Rozela was “intimidating the witness”.

Raja Rozela then apologised but said that she was using her “normal voice”.

“I will try to speak more sweetly,” she said.

Raja Rozela then suggested that Fadzlette’s action to request for the statements and cheques was beyond her job scope as press secretary of the deputy prime minister.

Raja Rozela: I put it to you, as a press secretary, you have no right to do so.

Fadzlette: I still have the right because I’m a senior officer.

Raja Rozela: As a press secretary, you can only do his text speech, ma’am. I say you don’t have the power to request for the statements from Mazlina.

Ahmad Zahid is facing 47 charges – 12 for criminal breach of trust, eight for corruption and 27 for money laundering – involving tens of millions of ringgit belonging to YAB. 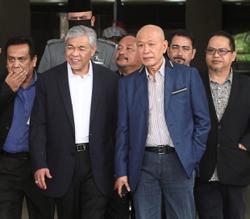