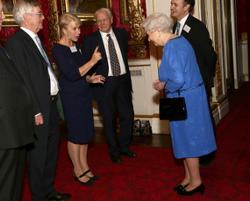 Members of the public walk past Westminster Abbey, where the funeral of Queen Elizabeth II will take place. – AFP

LONDON (AFP): The meticulously planned events for the state funeral of Queen Elizabeth II will follow a precise timetable on Monday (Sept 19).

6.30am: (1.30pm Malaysian time): The lying-in-state ceremony formally ends at Westminster Hall and the doors close to the public, ready for the transfer of her coffin to nearby Westminster Abbey.

8am: Doors open at Westminster Abbey for about 2,000 guests, including world leaders such as US President Joe Biden and Japan's reclusive Emperor Naruhito.

10.35am (approx). Bearers lift the coffin from the catafalque, a raised platform where the queen's flag-draped coffin has lain in state, and carry it to the state gun carriage waiting outside the North Door of Westminster Hall.

10.44am: The state gun carriage sets off on a short procession from Westminster Hall to Westminster Abbey, drawn by 142 junior enlisted sailors in the Royal Navy.

10.52am: The gun carriage arrives at the West Gate of Westminster Abbey, followed on foot by the queen's eldest son and successor, King Charles III, and other royals.

Bearers lift off the coffin and carry it into the abbey.

11am: The state funeral starts, conducted by the Dean of Westminster, David Hoyle, with Archbishop of Canterbury Justin Welby giving the sermon.

Noon (approx): The service closes with the national anthem "God Save the King" and a Lament, a musical expression of grief.

12.15pm: The coffin is drawn on the gun carriage towards Wellington Arch at Hyde Park Corner near Buckingham Palace.

It is followed by the king, senior royals and a procession including detachments from the armed forces of the Commonwealth grouping of 56 nations that the queen headed.

The "Big Ben" bell at the UK parliament and gun salutes fire at one-minute intervals throughout.

1pm (approx): The coffin arrives at Wellington Arch, is moved to the royal hearse and sets off for Windsor Castle, west of London.

3.06pm:The hearse arrives at Windsor and make its way to the castle via the sweeping Long Walk avenue to the castle.

3.40pm (approx): The king and senior royals join the procession on foot from the Quadrangle at Windsor Castle before the cortege halts at St George's Chapel at 3.53pm.

After about 45 mins, the coffin is lowered into the royal vault to a lone piper's lament.

7.30pm: A private burial service is held at the King George VI Memorial Chapel, with the queen laid to rest alongside the remains of her father King George VI, her mother, also called Queen Elizabeth, and the ashes of her younger sister, Princess Margaret.

Her late husband Prince Philip's coffin will also be interred there at the same time.

Who's invited to the Queen's funeral – and who's not

Hundreds of foreign royals and heads of state are expected to attend the Queen's funeral for one of the biggest diplomatic gatherings in decades.

Westminster Abbey has space for about 2,000 people. Around 500 heads of state and foreign dignitaries along with their partners are expected, according to BBC and Sky News reports.

A host of royals from Europe and further afield have confirmed their attendance at the funeral for Britain's longest-serving monarch.

Japan's Emperor Naruhito and Empress Masako will attend – their first overseas trip since assuming the throne in 2019. The visit marks a departure from Japanese tradition, which rarely sees the emperor attend funerals.

Europe's royal families are closely related after centuries of mingling their bloodlines, so it will be no surprise to see several monarchs from the continent.

Denmark's Queen Margrethe II, who scrapped a series of events marking her 50th jubilee following the death of her third cousin, Queen Elizabeth, is also coming.

Spain's King Felipe VI will be there with his wife Queen Letizia. So too will his father, former king Juan Carlos I, who abdicated in disgrace in 2014 and now lives in self-imposed exile in the United Arab Emirates.

Although Mohammed bin Salman, the crown prince of Saudi Arabia and its de facto ruler, had been invited, it emerged late on Sunday that he would not be attending.

There has been international outrage at the 2018 murder of journalist Jamal Khashoggi in Turkey by Saudi agents.

US President Joe Biden and his wife Jill head the diplomatic guest list and flew into Britain late on Saturday, also paying their respects in front of the coffin on Sunday.

Unlike some other leaders who have been asked to come in motor coaches arranged by the British government, Biden has reportedly been given permission to use his armoured presidential limousine, known as The Beast.

French President Emmanuel Macron will attend, the Elysee Palace said, to show the "unbreakable" bond with Britain and pay respects to the "eternal queen".

He is also among the leaders allowed to use their own transport, British officials said.

China will send its vice-president, Wang Qishan, at the UK government's invitation.

Other heads of state at the funeral will include Presidents Sergio Mattarella of Italy, Frank-Walter Steinmeier of Germany, Isaac Herzog of Israel and Yoon Suk-yeol of South Korea.

In a symbolic move to pay tribute to the queen, whose 2011 state visit to the Republic of Ireland helped heal decades of tensions over Northern Ireland's position in the UK, Irish Prime Minister Micheal Martin will be present.

Numerous leaders will come from countries where Queen Elizabeth was the head of state.

Leaders will also come from other states in the 56-nation Commonwealth, of which Queen Elizabeth was the symbolic figurehead.

Due to strained ties, the United Kingdom has opted to invite ambassadors, not heads of state, from several countries – Iran, Nicaragua and North Korea.

Russia and Belarus are among a small group of nations excluded altogether following Moscow's invasion of Ukraine.

Russian President Vladimir Putin – under a travel ban to the UK due to sanctions – had already said he would not attend.

But not inviting any Russian representative to the queen's funeral was "particularly blasphemous towards Elizabeth II's memory" and "deeply immoral", the foreign ministry spokeswoman in Moscow said Thursday.

Russia and Belarus have embassies in London and their presidents sent King Charles III messages of condolences.

Other countries with no invitations are Myanmar, Syria, Venezuela and Taliban-ruled Afghanistan.

Thank you for your messages, King Charles tells Britain and the world 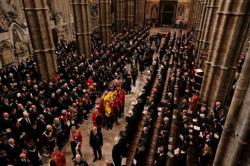 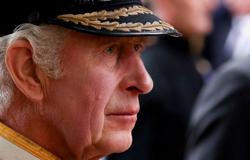