PUTRAJAYA: The target of zero hardcore poverty in the country by 2025 can be achieved through the various initiatives and programmes implemented by the government, says Datuk Seri Mustapa Mohamed.

The Minister in the Prime Minister’s Department (Economy) said the initiatives included the implementation of the Malaysian Family hardcore poverty eradication (BMTKM) programme which was introduced under the 12th Malaysia Plan (12MP).

“The government has allocated RM36bil under the 12MP to eradicate poverty and set aside RM150mil for the BMTKM programme.

“By the end of 2025, the government will declare that there are no more hardcore poor families in Malaysia,” he said at the Malaysian Family symposium, which was officiated by Prime Minister Datuk Seri Ismail Sabri Yaakob here yesterday, Bernama reported.

Mustapa, who presented a report on the achievements of ‘Malaysian Family in Dealing with Economic Challenges’, said to date, there were a total of 136,000 hardcore poor families in the country, including in Sabah and Sarawak.

In this regard, he said, the first phase of the BMTKM programme was being actively implemented involving 80 localities nationwide.

Mustapa said the government was also focusing on implementing programmes to increase people’s income to eradicate poverty in the country. 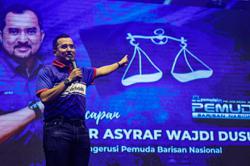