Ready for the courtroom: Zaid (right) and Liew arriving at the Palace of Justice in Putrajaya for the appeal hearing.

PUTRAJAYA: Far from his usual relaxed, almost scruffy self, Datuk Zaid Ibrahim walked into the Palace of Justice here with his white hair swept neatly back, looking every inch the senior lawyer in his dark suit and leather suitcase.

He was there for an “old enemy”.

Several years ago, there had been little love lost between the two.

Zaid, in fact, had been charged in December 2015 at the Kuala Lumpur Sessions Court with allegedly using offensive remarks in urging Najib, then the prime minister, to step down from office.

Zaid, who is the name partner of the new law firm Najib hired – Zaid Ibrahim Suflan TH Liew & Partners (ZIST) – was introduced to the Federal Court panel of judges yesterday as part of the defence team.

Previously, in a letter dated July 6, the Federal Court was informed by the firm that senior lawyer Hisyam Teh Poh Teik of Messrs Hisyam Teh would be leading the defence team while Liew Teck Huat and Rueben Mathiaravanam (both from ZIST) would be co-counsels.

There was no mention of Zaid.

Besides Zaid, a fifth name that was introduced to the defence team was lawyer Hannah Kam.

The relationship between Zaid and Najib has changed a lot since 2015. Just last week, Zaid supported Najib by saying that ZIST would never abandon him as a client for as long as the Pekan MP had confidence in the firm.

Najib arrived at the proceedings yesterday with his team amid tight security all around the building.

Wearing a dark blue pin-striped suit and a blue tie, Najib walked to the first floor of the building to face the highest court of the land.

His son Mohd Nizar was seen at the public gallery to support his father. 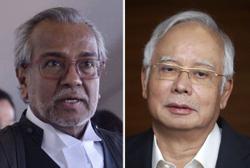