Chief Justice Tengku Maimun Tuan Mat, who is chairing a five-member panel, has retreated into chambers for deliberation together with the other judges.

Najib's lead counsel Hisyam Teh Poh Teik, in concluding his submissions Tuesday (Aug 16) morning, asked the court to allow the application as a show of the judiciary's strength.

"We ask the court to allow the application, to allow these parts of the evidence to be brought in as additional evidence.

"It would demonstrate the strength of this court... that this court is prepared to step in when it is obvious to the eye there is injustice," he said.

"His affidavits are irrelevant to the final appeal he is facing.

"We ask the court to dismiss the application," he added. 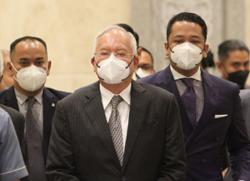