PETALING JAYA: A man with the title of Datuk Seri was among those arrested during a wild party at a Janda Baik, Pahang bungalow that ended with a narcotics raid by the police.

Bentong OCPD Supt Zaiham Mohd Kahar, in a statement, said that the raid was conducted at 1am Thursday (Aug 11) following a tip-off from the public.

"During the raid, the police seized 2.18g of what is believed to be ketamine, and 1.43g of Eramin 5 pills. The estimated value of the drugs is RM800.

"A total of 25 people were arrested including eight foreigners. All have been remanded until Aug 14," he said.

All 25 suspects tested positive for methamphetamine, he added.

"There will be no compromise in combating drugs within the Bentong district. I also thank the public, especially those in Bentong, who shared information with the police," he said. 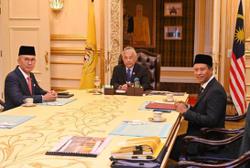