PETALING JAYA: Civil servants have been reminded not to make public statements in line with the Public Officers (Conduct and Discipline) 1993 regulations which are still in effect.

Public Service Department (PSD) director-general Datuk Seri Mohd Shafiq Abdullah (pic) said in a seven-page circular dated Aug 8 that it was being issued to explain, improve understanding and avoid confusion among civil servants and other interested parties on the matter of public statements.

The circular was distributed to all ministries and the office of the Chief Secretary to the Government.

"Civil servants must be positive and accept views, suggestions and criticism from any party of interest including higher-ups in order to improve... delivery by the civil service," he said.

Mohd Shafiq said a civil servant who was reprimanded by members of the public, supervisors, colleagues or superiors because of poor service should not respond in a provocative manner.

"Extreme provocation to garner attention or (made viral) is irresponsible and goes against the working culture of civil servants and the rules and laws which are in place," he said.

Mohd Shafiq added that civil servants must refrain from making public statements which can have unwanted implications on the civil service and the government’s good name.

He said the rules clearly state that civil servants cannot share fake news, nor can they defame or make accusations involving other public officers for their own agenda and interest.

"Civil servants are barred from misusing freedom of speech and technology advancement to achieve their personal agenda by breaching the rules and laws enforced which have been an axis of the country’s civil service," he said.

He added that the PSD would not keep silent and allow public officers to be defamed or treated unfairly to fulfil the personal agenda of certain quarters, and that heads of department were responsible for monitoring their subordinates' performance.

The letter further said higher-ups should reprimand subordinates who were careless in performing their duties to ensure that the services rendered were up to par.

Mohd Shafiq warned that disciplinary action, including termination from the civil service, could be taken if there was enough evidence that a civil servant had tarnished the image of the civil service or breached its rules.

"In matters related to the country’s security and sovereignty, immediate action must be taken without compromise or favouritism against any public officer for carelessness or non-compliance, especially if this involves security at main international entry and exit points," he said.

Earlier this month, the KLIA Immigration Operations head was said to have been on the receiving end of a dressing-down because there were no Immigration officers stationed at the VIP lane between 8.40am and 9.40am on a particular day.

The PSD had dismissed claims that its director-general publicly berated an Immigration officer, describing the allegations as baseless and maliciously intended to tarnish his image.

In a statement on Sunday (Aug 7), Chief Secretary to the Government Tan Sri Mohd Zuki Ali said the committee was set up to investigate the event following the Cabinet meeting on Friday (Aug 5). 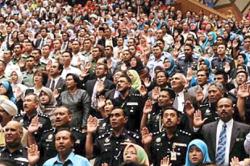