KUALA LUMPUR: The police have arrested a storekeeper for disrupting a preacher who was giving a talk at a surau in Ampang Campuran here.

"We received a report from the surau committee chairman that a man barged into the surau as a preacher was giving his talk and grabbed the microphone from him, saying it was too loud," he said.

ACP Mohamad Farouk said in a statement on Tuesday (Aug 9) that some people in the surau urged the man to leave and he did so shortly after.

"Based on our investigations, we arrested a 34-year-old storekeeper at Jalan Ikan Emas Mesra here at around 7pm on Monday (Aug 8).

ACP Mohamad Farouk warned the public against committing any acts which could threaten public order and peace. 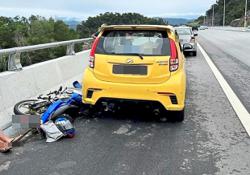