SERDANG: The government is prepared for the next general election (GE15) if any party decides to withdraw its support, says Prime Minister Datuk Seri Ismail Sabri Yaakob.

“If support is withdrawn, then we have no choice but to dissolve Parliament and have GE15 as the solution. We’ll just wait,” he said when responding to reports of Perikatan Nasional threatening to withdraw support for the current administration.

Ismail Sabri said he was aware of the reports, noting that everyone was free to speak their mind in a democratic country.

“What’s important is that we must be ready regardless of the situation. The election is definitely on, with no date set as of yet,” he told reporters after launching the Malaysia Agriculture, Horticulture and Agrotourism Exhibition (Maha) 2022 yesterday.

He, however, said the threat of Perikatan withdrawing its support for the Prime Minister did not reflect the views of all its members.

“I have been made to understand that the statement was only made by individuals and not agreed on by the party,” he said.

“Similarly, I understand that there were no official meetings by them to withdraw support for me.”

Ismail Sabri, who is an Umno vice-president, revealed that he had met with Perikatan delegates in an informal meeting.

“They shared their views and I shared mine and that is all. We have also agreed that the content of the discussion be kept confidential,” he said.

On July 28, Hamzah said in a statement that Perikatan would be sending a delegation to meet Ismail Sabri to discuss the execution of the terms of an agreement it signed with him.

Subsequently, Hamzah said he had expected to meet Ismail Sabri on Aug 4.

On another matter, Ismail Sabri said a special committee would be set up to investigate the case of a high-ranking government official who had allegedly berated an immigration officer in public.

“We have to be fair to both parties involved. The committee will be decided by the Chief Secretary to the Government as soon as possible,” he said.

He also called for all members of the public sector to work in harmony with one another.

“We want everyone to be together at all times,” he said. 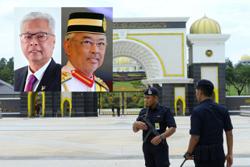