Two Myanmar children and dad die in murder-suicide on MRR2

In a statement on Tuesday, Sentul OCPD Asst Comm Beh Eng Lai said police were notified at around 5.50am.

"The complainant said that he saw the man and three children, two boys and an eight year old girl, on the MRR2 Highway within the Kepong area. "The man then tossed all three kids from the top of the highway before jumping himself.

"The height from the top to the ground is about 20m," he said.

The 36-year-old witness told the police that he tried to approach the man but was too late to prevent the act.

Three of the four died at the scene.

"All were found near the Desa Jaya traffic light. One of the boys survived and is being treated at the ICU at the Selayang Hospital.

"We believe that the man was the children’s father," he said.

He added that the surviving boy landed on the grass at the side of the road.

The adult and female child were found to be carrying United Nations High Commission for Refugees (UNHCR) cards.

Police were still investigating the ages of the two male children.

The case is being investigated for murder.

Those with information are urged to contact investigating officer ASP Baldev Singh Gurdial Singh at 012 480 6062 or the Sentul police operations room at 03 4048 2222. 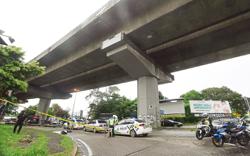