All MPs in the House vote for anti-hopping law

Historic milestone: MPs voting on the anti-hopping Bill in the Dewan Rakyat. — Bernama

KUALA LUMPUR: Dewan Rakyat voted a resounding yes to pass the anti-hopping law which will be ready for use before the general election.

“All Members of Parliament in the House voted for the law, all 100% of them.

Earlier, 209 MPs present in the House voted in favour of constitutional amendments to create anti-hopping provisions within the Federal Constitution.

Wan Junaidi said that the Constitutional (Amendment) Bill 2022 will now be tabled in Dewan Negara for the Senate’s approval.

“We have a timeline and the Bill will be brought to Dewan Negara this Aug 9.

“Once this is done, it will be presented to the King for the royal assent and date of gazettement.

“It should be ready to become law by the first week of September,” added Wan Junaidi.

The last time the House unanimously passed constitutional amendments was in December last year to restore equal status to Sarawak and Sabah under the Malaysia Agreement (MA63).

Bloc voting was held at the second and third reading stages of the Bill.

Both voting processes saw all MPs voting in favour with none against, while 11 MPs were absent.

“Congratulations to all MPs who have created history today,” Azhar said when announcing the final vote tally yesterday.

The Bill to amend the Constitution was tabled for the first reading during a special one-day Dewan Rakyat sitting on April 11.

However, the Bill was referred to a Special Parliamentary Select Committee for further scrutiny following some hiccups.

The Bera MP described the law as a historic milestone for the nation’s political stability.

Among them is a clause that MPs who defect from the political parties they represented as election candidates or those who become independents will have to vacate their Parliamentary seats.

However, there are exemptions for MP’s who change political parties when their former parties have been de-registered or if they are appointed to become Speakers of the House.

ALSO READ : Ismail Sabri thanks MPs for their support

“Many of them wanted to speak, but most of them were sitting on the front bench (ministers and deputy ministers).

“This was the problem which gave rise to some misconceptions.

“We did not want to break tradition,” he said.

By convention, ministers and deputy ministers do not participate in debates, which are mainly done by backbenchers.

The clarification by Wan Juniadi came after Bersatu MPs were jibed and taunted by several Opposition MPs for being “frogs” who did not participate in the debates.

However, the Bersatu secretary-general said most of their MPs were frontbenchers.

“I am a minister, so is Datuk Seri Azmin Ali. There were only one or two of us who were left as backbenchers,” he said.

A total of 54 MPs had taken part in two days of debates.

Ismail Sabri thanks MPs for their support 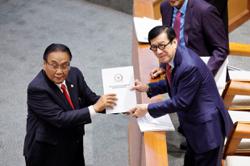