Screenshots of the video clip about a fire at a transmission main intake station in Yong Peng that is making rounds on social media.

YONG PENG: A 26-second video clip showing a fire at a transmission main intake station here has been making rounds on social media following the nationwide blackout on Wednesday (July 27).

Tenaga Nasional Bhd (TNB) has issued a statement saying that the fire was the cause of the blackout which affect various parts of the country including the Klang Valley.

“From what I understand, TNB has deployed teams to various locations to check on suspected power trips involving stations in Selangor, Negri Sembilan, Melaka and northern Johor,” he said without elaborating further when contacted about the incident.

The video clip, which is also widely shared on WhatsApp, showed blue sparks and flame at the station while a man’s voice could be heard saying that the location was at Yong Peng north.

A check by The Star with the state Fire and Rescue Department found that no distress calls were received with regards to the incident.

Meanwhile, Yong Peng District Council Zone 24 councillor Ong Gin Hong said there were no complaints of blackouts from residents in the area so far.

“However, I will keep in touch with the TNB branch here and check whether other areas are experiencing power disruption,” he added.

Areas throughout the Klang Valley had reportedly experienced power outages on Wednesday, with confirmed blackouts in Bangsar, Cheras, Shah Alam and beyond.

Malaysians have taken to social media to voice their complaints about the power cut with some mentioning places in Negri Sembilan and Perak having similar issues.

In a statement on its official Facebook account, TNB said it was aware of the blackouts and that electrical power has been restored to most areas hit.

#Blackout: Digi, TM Unifi say some users may be affected by service disruption 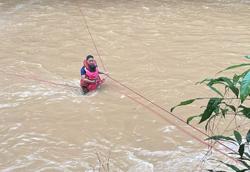