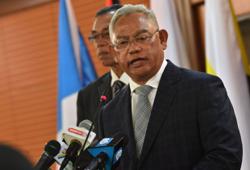 TANJUNG KARANG: Demolishing the Shah Alam Stadium would not have been an option if it had been well-maintained by the state government in the first place, says Selangor Umno Liasion chairman Tan Sri Noh Omar.

He added that it would be disappointing if the state government decides to demolish the stadium as existing development plans must continue.

As a Selangor native, Noh said the stadium has sentimental values for him and fellow residents of the state and added that the largest stadium in Selangor must be maintained and not demolished.

"By right, after three terms in power, the stadium should have been repaired and maintained as how we (Barisan Nasional) did before.

"However, if a house has been abandoned for 10 years, and only then there are plans to repair it, then of course it will collapse. But, it will be a waste to demolish and build a new one,” he told reporters after the Tanjung Karang Parliamentary ‘Korban Perdana’ Aidiladha sacrificial ritual programme on Monday (July 11).

Noh, who is also the Entrepreneur Development and Cooperatives Minister, questioned whether the state government had done enough maintenance work on the stadium since it was built in 1994.

He said this must be addressed by Selangor Menteri Besar Datuk Seri Amirudin Shari.

Previously, the media reported that Amirudin did not deny there were suggestions to demolish the Shah Alam Stadium and the matter would be explained in detail on July 16. - Bernama