'Painful to watch', says Harith Iskander in slamming woman who took off headscarf at comedy club 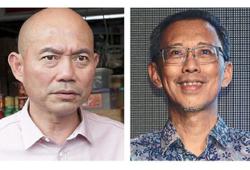 PETALING JAYA: The actions of a woman who took off her headscarf and baju kurung on stage at a comedy club is not stand-up comedy and was “painful to watch”, says Harith Iskander (pic).

That’s how the Malaysian comedian described the act of the woman in a viral video, who is now being investigated by religious authorities for allegedly insulting Islam.

“That girl is not a stand-up comedian and what she was doing is not stand-up comedy,” he said in a response posted on his social media on Saturday (July 10) night.

“It was painful to watch and more importantly, there was nothing funny about what she said or did,” Harith said, urging the public not to lump her actions into what other comedians do.

“What they did (pretending to try stand-up comedy at a comedy club then post it) was done to deliberately smear and discredit an art form that I have dedicated my life to.

“I started doing stand-up comedy in 1990 with a vision to uplift Malaysians through laughter.

“The intention then until now has always been to make people laugh while pointing out all our human idiosyncrasies,” he said, adding that Malaysians have always managed to laugh at ourselves while respecting each other's cultures.

In the viral video, the woman claimed on stage that she had memorised 15 juz of the Quran and then started to take off her headscarf and clothes to reveal a low cut top and mini skirt.

It was reported that the Federal Territories Islamic Religious Department has conducted a preliminary investigation into the video, believed to be an act of insult to Islam, committed at a comedy club in Taman Tun Dr Ismail in Kuala Lumpur.

Harith said not all stand-up comedy was funny to everyone as each person has different tastes, leading some to feel offended by certain jokes.

He said, however, that he judged it by the intention of the comedian, and the aim of stand-up comedy is to make people laugh.

“Her intention was to shock and offend. And she has shocked and offended.

"Therefore, she was not doing stand-up comedy,” he added.

Harith said at the end of the day, the woman “obviously needs help”.

“And I hope the medicine she gets is to let her watch true stand-up comedians,” he said before pausing and adding, “No, that won’t fix her either.”

Harith said while he initially felt bad for the woman because she might be unaware that someone might secretly be recording her act, he claimed it was her friend who shot the performance and that she had uploaded it herself.

Annuar Musa is the division chief sacked by Umno, confirms source
Lum makes final blood donation at 70 for 356th time
Covid-19 Watch: 1,616 new cases bring total to 5,006,855
INTERACTIVE: Here’s where Malaysians are going for vacation
A dire need for political literacy
Young voters: Social media influenced us but we are ready to learn
Three sacked for smearing, campaigning against party
Winds of change in Sabah
Regaining Sarawak’s powers a key factor
‘Deal must be transparent and be made public’