SEREMBAN: Datuk Seri Mohamad Hasan (pic) has denied that he said former prime minister Datuk Seri Najib Razak to go to jail for his role in the 1MDB scandal.

The Umno deputy president said he was misquoted in an Asia Times report saying that "Umno's No 2 thinks Najib should go to jail".

"That is inaccurate. What I said (during the interview) was that Najib should get a fair trial.

"If he is convicted, so be it. But what is important is that he has to get a fair trial," he said when contacted here on Tuesday (June 5).

Asia Times had quoted Mohamad as saying that the root of the nation's current malaise stemmed from Umno's failure to "tell the truth" about the 1MDB financial scandal.

He was also quoted as saying that Najib should not expect special treatment from an Umno-led government if he is eventually jailed on graft charges.

The portal quoted him as saying: "The court is the place where you can prove whether you're innocent or not.

"Everybody has to pay their dues. But if we want to pardon, he (Najib) has to go through the process. He'll have to go inside first."

Mohamad said he was merely explaining the pardon process in Malaysia.

"I was only saying that the pardon process usually starts after the individual has started serving his sentence. That is all," he said.

In July 2020, Najib was found guilty of seven charges of abuse of power, criminal breach of trust and money laundering in the SRC International trial.

He was sentenced to 12 years' jail and fined RM210mil.

The Court of Appeal also upheld the High Court's verdict on Dec 8, 2021. 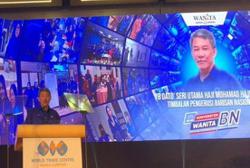