Superficial fix: Illegal practitioners normally would only provide ‘cosmetic’ treatment rather than treating the patient’s actual condition. This eventually will lead to complications.

She went looking for a cheap dentist – on Instagram. Big mistake.

Not only did she suffer losses of over RM400 but also ended up with a displaced tooth and bleeding gums.

Waniey Fauzi, 26, from Taiping, Perak, also had braces done but they came off in just five hours. The dentist who did the job did not return her calls.

Nur Syalwani Hanafi said she had wanted to follow the then trend, which was to wear braces.

“I had crooked teeth so I looked for dental clinics on Instagram. At that time, there were many on social media.

“The ‘doctor’ that I approached told me that her prices are much cheaper because she didn’t perform X-ray and there won’t be any tooth extraction.

“The tools that she used were quite similar to the ones actual dentists use,” she said.

On the treatment day, Syalwani immediately regretted her choice.

“I trusted her after reading all the feedback but when she came to my house I was shocked. She carried a ‘plastic toolbox’ which looked like one a mechanic would use.

“I wanted to cancel but I felt bad, so I kept calm and continued with the treatment,” she said, adding that she only knew that they were fake braces after she was told by an actual dentist.

The tools that the operator used were unhygienic and had an unpleasant smell, Syalwani said.

“She came to my house driving a Honda. Before that, she had visited another customer somewhere else.

“Imagine if she had a few customers a day, at RM450 per job, it must be good money,” she said.

Meanwhile, Waniey said it took only five hours for her braces to get detached.

“When I told her what happened, the operator ‘blue ticked’ me even though she had told me earlier that I could give her a call if anything were to happen,” she said.

Waniey too found the quack dentist on Instagram in January this year.

“I had the installation done at home. The ‘doctor’ was young, around 22 or 23, and the tools that she brought were similar to those in the clinic, but they looked like she had bought them online

“The cost was just RM100 plus an additional RM25 for transportation since she came to my house,” she said.

Waniey added the effects of incorrect placement for the braces caused her teeth to loosen.

“I took out all the brackets on my own leaving only the ‘glue’ on my teeth. I wanted to go to a clinic but I was too scared. I had no idea how to explain this problem to the dentist.

“My teeth are also turning yellowish,” she said, adding that she had learnt a good lesson to only get treatment from professionals. 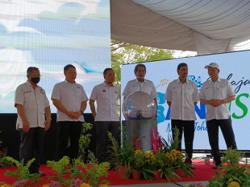