KUALA LUMPUR: The High Court has rejected Datuk Seri Dr Ahmad Zahid Hamidi’s request to stay his cross-examination by the prosecution’s pending an outcome of an appeal.

The court ruled that he would not be prejudiced during the cross-examination.

In his decision, judge Datuk Collin Lawrence Sequerah said there were no special circumstances to grant Ahmad Zahid’s application for a stay.

“The accused (Ahmad Zahid) has the liberty to interview the witnesses anytime, some of whom are family members, and the prosecution is also committed to assisting him. He is not being denied a fair trial,” said the judge according to Bernama.

The former deputy prime minister had filed the application to stay his defence’s proceedings, pending a decision by the Court of Appeal on his appeal to obtain copies of the recorded statements of defence witnesses in his corruption case, involving Yayasan Akalbudi (YAB) funds, from the Malaysian Anti-Corruption Commission (MACC).

The cross-examination of Ahmad Zahid began last Thursday after he had taken the stand to defend himself in the case.

In dismissing the stay application, Justice Sequerah said the court was bound by the precedent involving Datuk Seri Najib Razak in which the Federal Court denied him access to witnesses’ statements he sought.

“Following the determinative principle in Datuk Seri Najib Razak’s case in the Federal Court which, of course, binds this court, I find that the applicant (Ahmad Zahid) has failed to meet the required threshold,” he said.

“The application is dismissed and the trial process and cross-examination of the accused to continue.” Greetings at court: Ahmad Zahid being welcomed by well-wishers at the Kuala Lumpur Court Complex. — Bernama

Justice Sequerah adjourned the trial until today after Ahmad Zahid’s lead counsel Hisyam Teh Poh Teik informed him that some of his client’s lawyers were unwell.

Earlier, deputy public prosecutor Datuk Raja Rozela Raja Toran submitted that continuing the proceedings in the High Court was not prejudicial to the applicant’s right to a fair trial nor would it cause injustice.

She argued that the applicant was never hindered from preparing and proceeding with his defence as the witnesses listed in his affidavit were either known to him or related to him by blood.

“It is more advantageous to the applicant that his case proceeds in the High Court as he will have the earlier opportunity to vindicate himself,” she said.

Ahmad Zahid, said Raja Rozela, was facing very serious charges and that the trial involving a former deputy prime minister of the country was being closely watched.

“This trial has taken three years and the application is an obvious attempt to delay an early completion,” she said.

“This trial is also of public and national importance and any attempt to impede the progress of the proceedings must be rejected.”

Hisyam said the application was not to delay the trial but rather to ensure that his client got a fair trial.

“This case is of public interest and Ahmad Zahid must give full and complete evidence during the main examination before being cross-examined,” he said.

In response to the prosecution’s contention that the trial had taken three years since 2019, Hisyam said the defence could not be blamed for the shutdown imposed due to the movement control order during the Covid-19 outbreak.

On Jan 24, the court ordered Ahmad Zahid to enter his defence against 12 charges of CBT, eight of corruption and 27 of money laundering involving tens of millions of ringgit belonging to YAB after finding that the prosecution had successfully made out a prima facie case. 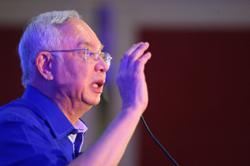