It all started when the then 15-year-old finally caved in to a boyfriend’s request for her topless photo.

They had been dating for just about four months.

“For weeks, that was all he would talk about. Every time we talked or texted each other, he would pester me for a topless picture of myself. “At one point, I couldn’t take it anymore so I sent him one photo to shut him up and hoped that would be the end of it,” said Lily, now in her 20s.

Unfortunately, it did not end there.

The 17-year-old boyfriend asked for more photos and eventually started trying to blackmail Lily into having sex with him.

“He threatened to expose the picture if I didn’t do what he said.

“I should have known better. I wish I could erase those two years of my life,” she said, adding that a police report was lodged and action was taken against the boy.

Lily is just one of many teenage girls who have fallen victim to such predators.

She told The Star that the police had received reports of more than 1,500 sexual- related cases involving social media platforms over the past five years.

ACP Siti Kamsiah said it was crucial for the public to identify red flags related to such incidents.

“They need to be alert for abnormal signs during a conversation. For example, if a guy asks for your naked picture or to show him your body during a video call, that is abnormal, so you should distance yourself right away to avoid untoward incidents,” she said.

D11, she added, was actively engaging children to educate them on such crimes against their age group.

“Cases involving children, especially sexual and online sexual exploitation, are quite alarming so we are hoping that through this outreach programme, we can educate children and their guardians about managing and identifying early signs to prevent victimisation,” she said.

ACP Siti Kamsiah also said that apart from the normal schools, they were reaching out to tahfiz schools.

“Soon, we will expand our outreach programme to other centres, including orphanages,” she added.

The case of a 74-year-old religious teacher, who was last week charged with raping and sexually assaulting two siblings in Penang, was the result of the outreach programme.

“We did an outreach programme with the tahfiz school in question, dividing the children into smaller groups.

“The children were taught about various sexual offences and what they should do if such incidents happened to them.

“During one session, some children who had become victims (of the suspect) shared their experiences with our officers, who then contacted the family to lodge a police report.

“The suspect is the victims’ neighbour,” said ACP Siti Kamsiah.

She noted that many young victims began to get acquainted with sexual predators through social media platforms such as Facebook and Instagram before their conversations moved to more private chatrooms such as WeChat and WhatsApp.

The suspects, she added, would sweet-talk the victims until they agreed to share their private photos or videos.

The predators would then make use of these photos and videos to coerce the victims into giving them what they wanted, including sex.

“We are seeing a lot more cases involving children who fall victim to sexual predators because they share their naked photos.

“Most of them are children because they can easily be manipulated, though we have also received reports involving adults,” said ACP Siti Kamsiah. 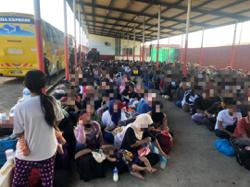